Background: There is an almost complete lack of statistical data on the relationship between gender-identity policies and incidents of sexual violence in bathrooms and change rooms. Using Target stores as a case study, we analyzed 220 media-reported sexual offenses in Target stores from 2003 to August of 2017 to determine the association, if any, between their gender-identity access policy made public in April 2016 and reported sexual offenses in their stores.

Results: Sexual incidents increased over the course of the entire timeframe of the media reports. In particular, voyeurism-related offenses (Upskirt and Peeping Tom) increased significantly after the publication of Target’s gender-inclusion policy in April, 2016. The three-season forced-category measurement found a 2.3x increase in the amount of upskirt incidents after the policy, and a 2.9x increase in peeping tom incidents after the policy. In a Poisson regression, using trimesters to control for seasonal variations in offenses, the fold change in rate from the four year pre-policy period to the post-policy period was 3.03 for Upskirt and 3.14 for Peeping Tom. Using a two year pre-policy period, the rate change was 2.16 times for Upskirt and 2.34 times for Peeping Tom.

Conclusion: While media-loss remains a limitation in the analysis, the present study supports the theory that sex predators may take opportunities afforded by gender-inclusion policies to perpetrate sexual violence against women in public spaces. No other theory seems to account for the significant and precisely-timed increase seen in the Target reports. Further study would be helpful to compare police reports to media-reported crime and to geographically match Target with similar stores to investigate whether sexual offenses have increased elsewhere. 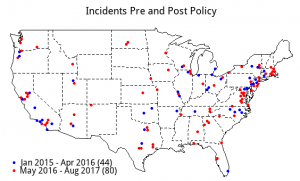