GLAAD states that “Transgender Day of Remembrance (TDOR) is an annual observance on November 20 that honors the memory of those those lives were lost in acts of anti-transgender violence.” I believe that every taking of a life is not only a tragedy, but an act of evil that should carry the fullest punishment under law. I personally believe that every human creature is made in the very image of God and support capital punishment for murder and rape. Your own views on murder and its punishment may differ, but I mention these things because I believe murder in general to be heinous and wicked, and murder of transgender people in particular to be the same.

While I have no qualms or concerns with those who want to set aside time to remember those of a particular community and the violence they face currently or have faced historically (ie. Jews, Blacks, Indigenous peoples), I do have concerns with some of the misinformation surrounding the murder of trans people and how it has been weaponized to facilitate an agenda, such as the erasure of sex-based rights and the indoctrination of young children in gender identity ideology . 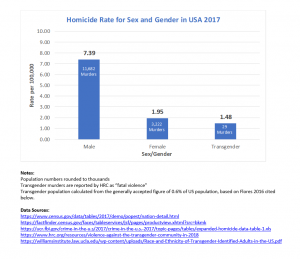 This is good news for trans people; violence against the trans community may not be nearly as high as has been inferred. This accords with findings from the 2015 US Transgender Survey which found that 1% of trans people over the last year had been grabbed, had something thrown at them, been punched, or had a weapon used on them for any reason in a restroom (see Appendix B, Section 17). This 1% is one hundred percent too high, but it is far smaller than what is sometimes assumed and it involves violence “for any reason”. The percentage for anti-trans violence would be smaller than 1%, perhaps much smaller.

This leads to a secondary concern with TDOR, which is that it is often inferred that violence against trans people is due to anti-trans sentiment- that these murders are driven by transphobia. This is not true in the majority of cases in the US. A perusal of the stories of the murder victims reveal a significant number of tragic stories involving prostitution but very few where anti-trans hate is clearly a motivating factor. As one example, the first case of a trans murder to ever be tried under anti-hate legislation didn’t occur until 2017 (and in fact may be the only one, although I am willing to be corrected), and even with that hate conviction there remain not insignificant reasons to believe it wasn’t motivated by anti-trans hate at all, but gang-related issues. Even the seminal case of Matthew Shepherd, for whom the hate legislation is named, is no longer seen by many as a hate-related crime, but as a drug-related one.

I repudiate hate-related crime in all its forms. I repudiate anti-trans hate and anti-LGB hate. I repudiate the actions of groups like Westboro Baptist who protested at Matthew Shepherd’s funeral. But the news is good. Trans people are not being murdered as much as males or even females. By all means remember those who have had their lives taken due to violence. These are lives worth remembering. But don’t inflate numbers for an agenda.

Why Bill C-16 Destroys Women's Rights, Identity, and Freedoms
Is the Only Valuable Thing About Women Their Biology?
Twenty Accounts: Female's Fears Not Unfounded
Share this:
Tagged with: USA, Violence