We Represent the Majority 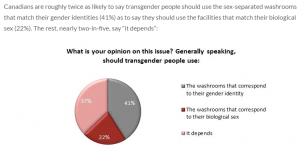 Late last year, Angus Reid did a poll on “Transgender in Canada“, which included a wide variety of questions. As in all studies and polls, you have to be careful to read the entire thing to get a good representation of the data presented. There are many ways to present data, and it can be easily skewed. The key-findings listed include:

On washrooms, some 58 per cent say transgender people should use the ones they feel most comfortable using, rather than having their washroom choice decided by laws or policies

There are three distinct Canadian mindsets when it comes to views on transgender people: “Trans Allies” (48% of the total population), “Trans Opponents” (15%), and the “Sympathetic but Uncertain” (38%)

If you don’t read on, you would think that the majority of Canadians support the opening of women’s safe spaces to whoever claims to be a woman. Even before proceeding further however, note the incredible difference between the 84% supporting non-discrimination laws and the 58% who believe it shouldn’t be laws and policies which determine which bathroom trans individuals should be able to use. Trans-advocacy groups claim that those are one-in-the-same question, and that full rights mean use of whatever space aligns with gender identity. Clearly, however, a significant amount of Canadians do not think those are the same question or issue, a point we have been trying to raise with our campaign.

It is Q.10, on page 13 of their tables that is most relevant to us. The question is “Legislation proposed in some U.S. states would require transgender ppl to use public washrooms that correspond with the gender they were assigned at birth, not the washrooms that match their identity, should transgender people use:”

In other words, there is already a reference to US bathroom policies in places like North Carolina, and it is within this context that they give three answer options to this question: Corresponds to Gender Identity (41%), Corresponds to Biologic Sex (22%), It Depends (37%). This means that a majority of polled Canadians (59%), believe that it is not so simple as people using the bathrooms which correspond to their gender identity, which is what Bill C-16 would permit. Our campaign falls firmly into the “it depends” group. Most of our supporters have no problem with a natal male who has fully medically transitioned to female with sex-reassignment surgery using women’s spaces. We do not believe penises should be allowed in women’s safe spaces.

The question Angus Reid decides to list in their “key findings” is the next major question: “Q12. Some say transgender people should use the public washrooms they feel most comfortable using, while others say there should be rules and policies to determine which washrooms transgender ppl use. Which is closer to your point of view?” This is a question with a binary answer choice, either “feel comfortable” or “rules and policies”. So why would support for full-choice be significantly higher with Q12 (58%) than with Q10 (41%) which didn’t make their key findings? Firstly, as they themselves mention, it is only a binary choice. Those who previously responded “it depends” are forced one way or the other. But secondly, they have already mentioned US policies, which have been much in the news. Thus, it is very likely that many who previously answered “it depends”, are thinking that they don’t like all aspects of the North Carolina bathroom bill. I and many in our campaign would agree! At the very least, to cite the 58% support number without the 41% as well seems to be extremely biased.

But here’s the the thing that is particularly interesting and relevant to our opposition to Bill C-16. Angus Reid only polled about bathrooms. While bathrooms are by no means always safe (see our Violence Database), there are always separate stalls. There is no open nudity. What if Angus Reid had asked the question, “do you think transwomen with male genitalia should be able to use women’s showers?” We can only guess, but we suspect the number of Canadians who would answer “no” would be much larger yet.

Our campaign represents the majority of Canadians.