In February of 2015, the Vancouver Province ran a story on the rise of voyeurism in B.C., my home province, with the headline “How can we get men to stop doing this?” The sober reality is that the crime of voyeurism, almost always by males, may be virtually impossible to stop. Voyeurism is an enormous monster that lives in the shadows of our culture, hidden to many, but continually nourished by advancing technology, pervasive pornography, and increasing opportunity.

Voyeurism has been seen as a very minor crime historically, but recording technology and the statements of victims are beginning to change that. One of the voyeurism cases cited by the Province article was that of Jonathan Stringer who hid a video camera in a unisex public washroom in Whistler, BC. One of his victims shared the effect it has had on her; “I have post-traumatic stress disorder from it. I was off work for a couple months, I was having problems sleeping and having weird dreams about being watched. It definitely affected me and made me fear for my safety.” More and more, voyeurism is starting to be recognized for what it is–sexual assault against women.

Advancing technology is also changing the perceived seriousness of voyeurism. Not only is miniaturization making it easier for men to record women, but the fact that pictures and video can be stored, shared, and viewed over and over again, has significantly changed the nature of the crime from the traditional “peeping tom”.

Inherent in the question “how can we get men to stop doing this” is the question of prevalence. Is voyeurism wide-spread or limited to a few scattered predators? A look at the literature and studies on voyeurism reveals surprisingly little on the subject. In a day and age where every topic has seemingly been studied in minute detail, there is a glaring paucity of good information on the subject. But the data that does exist is eye-opening. Templeman (1991) found that no less than 42% of college men in a rural sample reported that they had engaged in voyeurism. Bradford et al. (1992) reported that of 443 adult males studied, 115 admitted to voyeurism” (cited from Krueger, 2016). Rye & Meaney (2007) found that 61% of the men in their university sample would engage in voyeurism if the likelihood of getting caught was 25% (cited from Krueger, 2016).

These enormous percentages suggest that voyeurism is far more prevalent that commonly thought. And not only because of the amount of men who are voyeurs or express voyeuristic desire, but also because of the the amount of acts committed by those who are recognized as paraphilic (anomolous or deviant in their sexual behaviour). Langstrom & Seto (2006) cite a 1988 study of sexual deviants by Abel; “Exhibitionistic and voyeuristic acts occurred up to 150 times more often than official police arrest statistics indicated.” We see this not only in the literature but in the news. In May 2016, David Walker (archived) was convicted of voyeuristic activities including filming “hundreds of women in swimming pool changing rooms”, most of which probably occurred in unisex facilities, a common layout in public pools in the U.K. In December 2015, George Thomas was convicted of voyeurism, with the police having found personally-filmed voyeuristic videos of more than 3500 people in his possession. Yes, that number is correct. These were recorded over a six-year period, with Thomas finally being discovered when a female colleague found a recording device in the unisex staff shower room at Ernst & Young.

Some of these cases have had high visibility in the news, but are incidents actually on the rise? As Krueger explains in “Noncontact Paraphilic Sexual Offenses” (2016), it has been difficult to track historically because of how it is criminally categorized in different countries, including the United States. In Great Britain, however, they do have a criminal offense for voyeurism. We did a search at The Law Pages, and found that there has been a significant rise in voyeurism convictions in the UK. In the years 2006-2009 there were only 2.25 convictions per year. A significant rise was noted in 2010-2012 where the average rose to 6 convictions per year. However, over the last 4 years, 2013-2016, this number has exploded even higher, up to an average of 16 convictions per year.

[Note: These numbers may seem low compared to the hundreds in our database, the thousands who are victims of a person like George Thomas, and the many thousands, perhaps millions, who have actually perpetrated voyeurism, according to Templeman. But sexual offense convictions always represent an exceptionally small amount of actual incidents. This would be the case with sexual assault, exhibitionism, and rape as well. Beyond that however, voyeurism is very difficult to prosecute because of the need to prove intent for a sexual purpose. Many voyeurs receive a warning and are released, which was the case with Jonathan Stringer.] 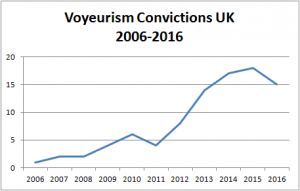 These scary statistics on voyeurism prevalence, incidents per perpetrator, and the exponential rise of convictions have a significant bearing on “bathroom bills” and allowing access of biologic males into women’s safe spaces. At WOMAN Means Something, we oppose trans-advocacy policies and bills like Canada’s Bill C-16 which, though well-intentioned, put many women at risk of sexual violence. On January 14, 2017 we released a set of data, with original sources, that documents no less than 140 incidents in North America and the UK of sexual violence to women by biologic males in safe spaces like washrooms and change-rooms. Seventy-six of these recorded incidents took place in 2015 and 2016. To our knowledge this is the most comprehensive database on these kinds of incidents available. The vast majority of these were of non-transgender males who took advantage of unisex spaces to perpetrate voyeuristic activities against women.

It is highly likely given the statistics found in the literature that these incidents represent the tip of the proverbial iceberg. Policy makers and politicians need to understand that their consideration of opening women’s spaces is taking place in the middle of a voyeurism epidemic. Rights and freedoms don’t live in a vacuum. In this case the rights of one group (trans individuals) dramatically impacts the rights of another (females). How can we get men to “stop doing this”? There may not be an easy answer. But until we find one, let’s make certain that we do not increase the opportunities for women to be sexually victimized. Where there has been opportunity, there has been sexual violence. There is enough data now that this is clear, and there is no excuse. If you care about sexual violence against women, we must act to keep their spaces safe.